It was hard to believe that Ashleigh and Harrison, actors from the Phoenix Theatre, were on a school stage for the very first time when they performed three plays at PMG on Friday, 27th September 2019.

Accompanied by the theatre’s director, Kristi-Anne Seth, they set up three different stages and created many different characters over the course of one morning, so that all our pupils could enjoy an authentic English language performance. There was even time for conversations off stage, which served as an additional motivation for many.

Years 5 to 7 saw a performance of “Mc Vamp”, a play about growing up and accepting our differences. Set in a castle in Scotland, the young vampire Cedric McVamp struggles with traditional family expectations. Instead of working in the family business, “Mc Vamp’s Blood Bank”, he dreams of opening an ice-cream shop. Together with his cousin Rosemary, he follows his dream. The level of English was challenging for our youngest pupils, but the story itself was easy to understand. The Phoenix actors performed this story as a musical with catchy songs and dance and also brought some pupils to the stage, which was great fun for everyone!

This was followed by “Echoes” for Years 8 to 10, a play about cyber-bullying and its consequences. The audience witnessed the stories of two characters, Lilly and Ryan, who live in different places but experience the same personal nightmare. It was a gripping performance, which, despite being held in a sports hall in broad daylight, made even the viewers in the last rows hold their breath at times! As well as the thought-provoking topic, the pupils appreciated the authentic conversations and excellent acting.

The last play of the day brought Shakespeare’s “Macbeth” to life for Years 11 and 12. For many pupils this was their first encounter with Shakespearean English, as this modern adaption included many lines from the original classic tragedy. Even though this was quite a challenge for some, the performance was highly entertaining, especially when classmates were turned into witches, traitors and kings on stage! A Shakespearean play is usually part of the English course leading to the Abitur, so this introduction will hopefully inspire the pupils to be curious about his work and life.

Thank you, Phoenix Theatre, for an enjoyable morning and good luck for this theatre season! 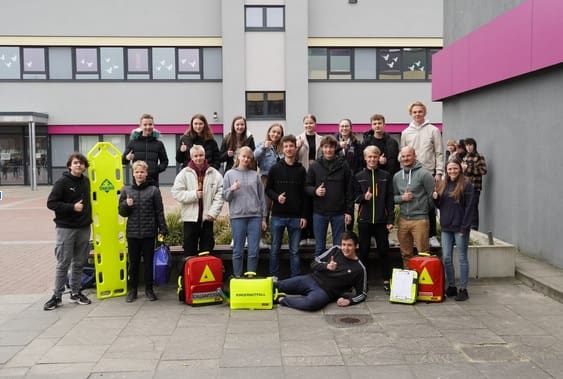